Underlying any autonomous technology is the promise and necessity of superior safety. The technology in any autonomous vehicle helps it navigate the world around it; to do it safely and precisely is of utmost importance. The increasingly sophisticated functions of AVs necessitate that each vehicle have reliable knowledge of its precise position.
acienna

Perception sensors see the world around the vehicle and are often the primary source of information for active decision making. Such sensing technology includes radar, lidar, infrared, ultrasonic and camera vision – all backed up with intensive compute power.

Guidance and navigation systems tell autonomous vehicles where they are and where they need to go. These systems consist of GNSS/GPS receivers and an INS (inertial navigation system) which includes inertial motion sensors and inputs from odometry and steering sensors. 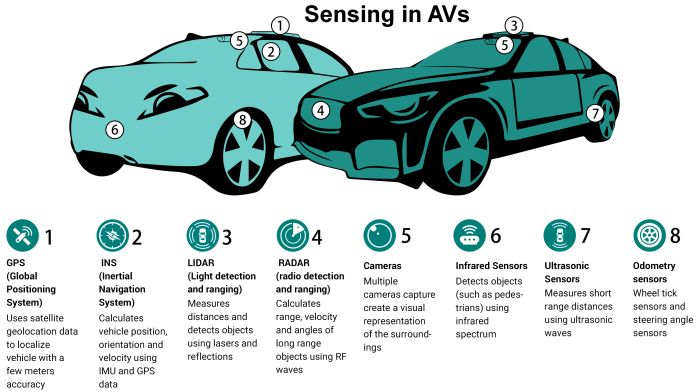 MEMS-based inertial sensors such as gyroscopes and accelerometers have long been used in vehicles as discrete components – for collision detection, airbag deployment, and electronic stability control. High-end IMUs (inertial measurement units) using MEMS or fiber-optic technology are commonly utilized in aircraft and tactical guidance systems and offer performance on the order of 10x to 1,000x higher than traditional MEMS sensors.

As autonomous vehicle technology and safety standards progress, it is becoming apparent that the positioning accuracy and precision required from IMUs and INS now approaches those for aerospace and tactical grade devices – consistent and reliable centimeter-level accuracy rather than meter-level accuracy.

Until recently, this level of performance and safety integrity for IMUs has been too expensive for high volume markets such as automotive. However, we are now seeing innovations in design and manufacturing that make high-performance IMU technology accessible and economical for a wide range of autonomous applications and broader industrial uses.
Why an IMU?

An IMU is an electronic module that integrates multiple inertial sensors to generate acceleration and angular rate measurements along multiple axes or degrees of freedom. A six-degree-of-freedom (DOF) IMU consists of a three-axis gyroscope and a three-axis accelerometer. Measurements from these sensors taken over time are combined using an Extended Kalman filter (EKF) to make highly accurate calculations of position, velocity and attitude or orientation. Attitude heading and reference systems (AHRS) combine magnetometer readings with IMU data to calculate heading, roll and pitch. An INS adds GPS to track the position, orientation and velocity of an objects.

In a typical AV application, the INS works in conjunction with the traffic and HD maps as well as with perception sensor systems to determine the vehicle route and how to navigate it. When all systems are operating normally, with nominal environmental conditions and good satellite coverage, an INS with a traditional automotive-grade IMU usually provides sufficient positioning accuracy and reliability for safe operations.

However, more often than not, environmental or other external conditions are less than ideal. Commonly, the GPS signal is lost or degrades because of urban canyons, tunnels, overpasses, multipath errors, or poor satellite coverage.

Alternatively, or in addition to GPS loss, a vehicle may encounter tricky conditions such as precipitation or reflective surfaces which can compromise the performance or integrity of data from the camera, lidar, and/or radar systems. In all cases, it is imperative that the autonomous vehicle reliably continue to navigate itself along the route, safely maneuver to a stop, and/or request intervention.

The task of navigating when sensor inputs are garbled often involves a process called dead reckoning. Here the AV system relies on other sensors, primarily the IMU, wheel rotation sensors and, if available, vision.

Fortunately, the one external factor we can rely on to remain constant (mostly) is Earth’s gravity. Regardless of environmental conditions, the IMU will keep sensing and provide position information.

Using the appropriate level of IMU performance can be the difference between crashing into the wall of a tunnel or making it through to the other side.

Bias and drift errors inherent in all MEMS devices place a burden on the system to remove those errors. Errors unaccounted for directly integrate over time into position error. High-end IMUs that are rigorously calibrated over temperature and time can drastically reduce these error sources.

Another exciting trend in precise INS positioning is the emergence and expansion of RTK or Real-Time Kinematics. RTK improves GPS positioning accuracy by a factor of 100x, from meter-level accuracy down to centimeter-level accuracy when appropriately fused with IMU data. RTK technology refines the position data received from GPS signals by removing ionospheric and tropospheric delays, multipath, satellite clock and ephemeris errors (caused by the GPS receiver using the satellite’s location in position calculations). RTK systems use survey grade base stations which broadcast corrections to rovers (moving objects or vehicles) via a cellular signal. The corrections are fused with GPS and IMU data through complex algorithms and Kalman Filters to provide a final position specific to a rover.
RTK positioning

RTK positioning and location technologies are valuable for a wide range of autonomous applications including those in agriculture, construction, robotic delivery, drones, as well as for consumer autonomous vehicles.

Until recently, RTK and similar services have come with a hefty price tag and long acquisition times. So they have been used primarily in agriculture, land survey, construction applications for off-road vehicles in geo-fenced areas. The proliferation of autonomous vehicles and their need for precision positioning is giving rise to new RTK software scalable across geographies which is economical, easy to integrate, and optimized for AV sensor fusion.

It is essential for any autonomous vehicle to precisely know its location and surroundings, its destination and how to get there. Though it is unclear when autonomous vehicles will be consumer items, the technology is already wide spread in some industry segments. The combined capabilities of advanced IMUs and RTK promise to democratize inertial navigation systems that provide the high performance, safety and enhanced integrity that is vital for scalable and secure autonomous operation.